Inside 3 Big Deals with Mark Daniel and Alan Dunn 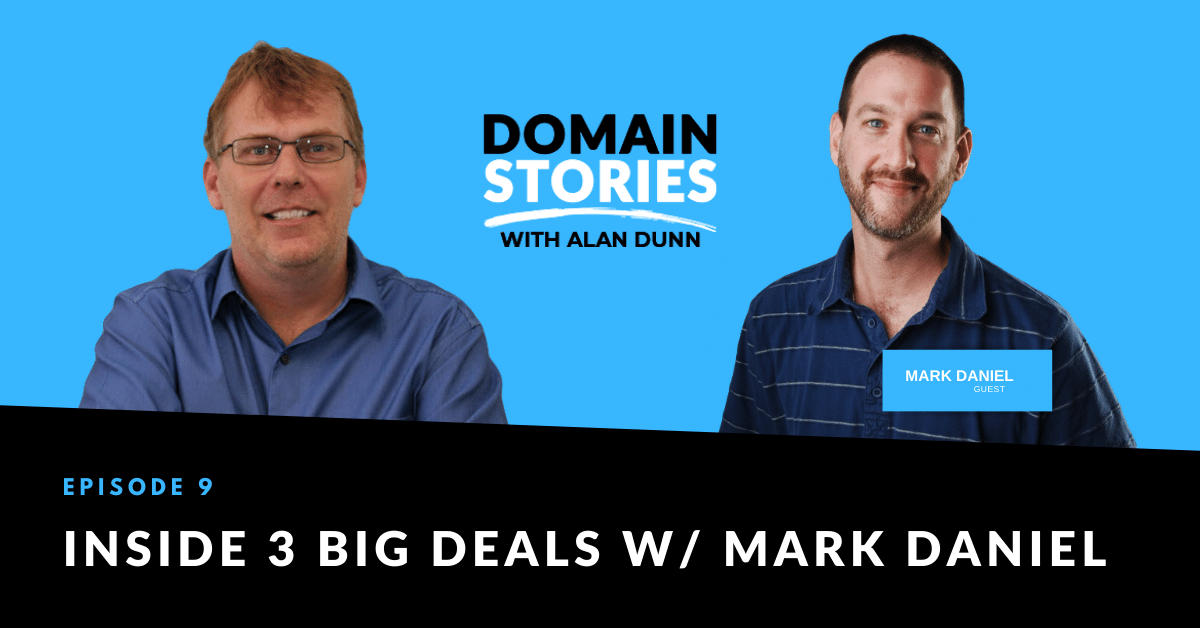 Go inside 3 big domain name deals with Alan Dunn, Mark Daniel and special guest Wendy Leung. Hear how a seller was found by a random text message on a TV show, how a deal was agreed upon but the seller decided to sell the whole company instead of the domain (to someone else!) and more. 3 domain name industry pros dive deep into a few complex transactions.

0:51 – In this episode Alan talks with Mark Daniel of Domain Holdings. They met during their time at Domain Holdings and Mark has also worked with many large companies during his career. Mark discusses his expertise in the domain name world and, also, his passion for the band, Phish.

2:40 – Mark shares a story about finding a domain name owner through a television show. A large media company had a large confusing brand name, but Mark suggested abbreviating the company name for the domain name. Unfortunately, the new domain name was already being used by a large media company and Mark was having difficulty contacting the company. Coincidentally, he was watching a real estate show that was buying from the same media company Mark was trying to contact. While he was watching the show, he spotted a contact name, contacted him and was able to start negotiation three weeks later. Unfortunately, the price was more than the owner was willing to spend, but because of that connection with the media company, Mark was then asked to find a buyer for the media company’s domain. This was the beginning of their business relationship.

8:20 – Mark then goes into a story of a company that was abruptly sold in the middle of a domain name deal and then having to restart the deal with a new owner, who then wanted a completely different offer. Mark was helping a startup company develop a simpler name. The domain name was already owned, and the owner willingly made a contract to sell the domain to Mark’s buyer. Suddenly the company went silent. They sold their company and the domain name to someone else. To Mark and the buyer’s frustration, Mark then began tracking down the new company, who had no interest in selling, even after they made an initial offer. Mark describes how he could sense a deal was still available. After a new multimillion-dollar price for the domain from the CEO of the company, both parties made a final deal.

17:50 – Alan Dunn brings in Wendy Lung to the interview, also a previous co-worker of Alan and Mark. She describes the first job working on a premium domain name. She talks about the different factors that go into premium deals, including timing. Even though Wendy was looking at positive email data, she wasn’t getting the leads and offers the company wanted. The company then decided to accelerate the sale, and Wendy worked on lowering the price even though the company knew it was worth more. She now went back to those previous leads, because she had a new price to negotiate, but it appeared they wouldn’t be able to sell the domain. Wendy talks about running reports to go over their potential options, so the seller could make an intelligent decision. They went back to those highest offers and ended up selling for more than half of the initial asking price. Wendy describes this story as a large learning experience in her career.

Follow Alan Dunn on Twitter @alangdunn and @domainstories, and visit Namecorp.com for more information on buying or selling a domain name.

Page load link
This website uses cookies and third party services. Ok
Send this to a friend
Go to Top